We ship worldwide  Free shipping on orders above €35 in NL   HEATWAVE ALERT: Use code SWEATYTITS for 10% discount on all items! 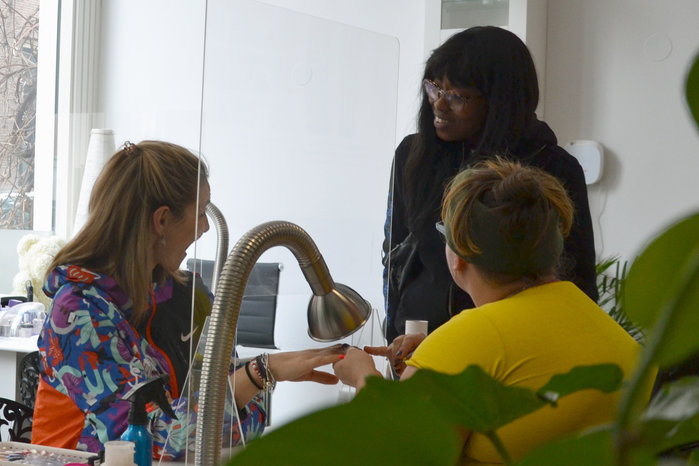 For what is essentially a fashion blog, the following interview might be a tad unconventional — but therefore all the more relevant. Rather than introducing our models or exploring feminism in fashion, We’ll impart the story of Share Network, a foundation empowering survivors of sex trafficking. We’ve long respected the foundation’s work and tried to collaborate or donate when we could, most recently after pink Friday. To learn more about Share Network, we met up with its founder and director: Roëlla Lieveld, at the bustling nail salon serving as an Academy for some of Share Network’s participants. Surrounded by laughter and the scent of nail varnish, Roëlla spoke with serious clarity of her personal connection to her cause, challenging the taboo around sex trafficking and covering up branded tattoos.

You are the founder of Share Network: a foundation that raises awareness around sex trafficking in the Netherlands and empowers its survivors. How did you get involved with this work?
When living in the United States, I handed out Turkeys during thanksgiving with the help of some fellow students. We mainly went to project neighbourhoods or trailer parks, where I started to become friends with the residents. One girl shared that at the age of 15, she had to do tricks for her daddy. I later learned that ‘tricks’ means prostitution and ‘daddy’ is a synonym for pimp. We started a women’s group raising awareness around their stories, using art, theatre and media so people could relate to this heavy topic.

I felt like these women were my heroes, they inspired me. They were strong, through these crazy circumstances. I admired their ability to share those stories with me because I had stories for myself that I didn’t share out of shame. I felt like needing to work with these women, needing to do something against this problem of human trafficking and modern slavery.

And how did you shift that work into Share Network in the Netherlands?
I was born in Amsterdam and most of my family is here. So when I discovered human trafficking also happens in the Netherlands, I wanted to do something about it in any little way I can. I think human trafficking does not discriminate. It does not look at gender race or identity, it's an exploitation of people.

So on your website, you state that modern slavery is often talked about in very hard to define numbers. Could you give us an idea of the severity of modern slavery in the Netherlands, beyond the numbers?
On the dedicated government website it states that yearly, there are 6250 human trafficking victims in the Netherlands, which only accounts for the cases with official police reports. We shouldn’t underestimate that human trafficking is one of, if not the fastest-growing criminal industry. Exploitation exists not only within the sex industry but also within organ trafficking, agriculture or criminal exploitation… I think we've only seen the tip of the iceberg. It’s more prominent than we expect or would like to admit.

Yes, and I feel like there exists a taboo around sex trafficking. Do you agree with that?
Yes, psychologists talk about something called ‘secondary trauma’. Trauma invokes the fight, flight or freeze response. Because it’s beyond the norm, it pushes us out of our comfort zone and since we’re geared to survive, we try to push this secondary trauma away. Sex is supposed to be something pleasurable, so when that’s used to manipulate somebody, that’s horrible. Because of the taboo, not every victim initially self-identifies as such, so that’s the first step. When someone takes the profit of your labour, that’s when we speak of human trafficking.

And how do you initially connect with the survivors?
People sometimes get referred to us through the police or different organisations within the field. But I’d say it’s mostly through word of mouth because it’s still such a taboo. Not many people know we exist because our area is so dark. Most victims also come from a migrant background, so don’t know the infrastructure of the land. So they’re wondering who they can trust because their trust has been broken and damaged so many times. So then they reach me via someone they know.

It appears as if your connection with the survivors is very friendly, relaxed and personally involved.
It is, we're going to have dinner soon with some of the girls. I believe everyone is human, but I also suffer from something I’d call ’hero syndrome’. Sometimes I think “you’re a victim and I know what's best for you”, but in the end, these people are not only victims, they’re fighters and mothers and daughters and much more. To move forward, you need to be able to leave the past behind. So, to continuously remind somebody of their victimhood, I don’t think that’s productive.

So Share Network creates opportunities for survivors to thrive by “empowering, educating and employing”. Could you tell me a bit more about these steps and their importance?
Empowerment speaks to regaining your power and strength after it’s been broken and finding a space where you belong again. Since we don’t all speak the same language, we do movement, dancing, laser removals and tattoo coverups… Activities that don’t require speech nor thought of past trauma. The Share Academy provides students with an education in collaboration with companies, we have a coding program and the nail salon where you just were briefly. They enable students to see their progress and take pride in what they do. Employment regards internships with our business partners. One of the first girls going through our program is now a senior program coordinator at the Share Academy, which is cool.

You previously mentioned the Branded Free campaign, which raises awareness around, and covers up, branded tattoos. Could you tell me a bit more about that?
I wasn't fully that this also implied ownership, subliminally. During one of our dance classes, one of the girls said she won her court case but that she still is reminded of her past, because of her tattoo which was about her pimp. From there we figured we needed to get her tattoo covered up. I started thinking about all these girls with tattoos of their pimp’s names, who are still being branded as a form of ownership, it’s insane. Even yesterday, we got registrations for a cover-up and a laser removal.

Could you share an anecdote with us of some of the transformations that the Share Network participants go through?
We definitely have some success stories: The girl I mentioned previously was one of the first to enter our program in partnership with Oracle Digital. Because of that support system she’s now a cybersecurity engineer, believe it or not. So, she might be able to hack y’all.

Luckily we have nothing to hide!
Haha! And, she’s leading others, which is great because she understands when somebody is flipping out and knows it’s not personal. The compassion and understanding for one another is great.

Speaking of: I admire how Share Network involves survivors in shaping the program and awareness-raising. Often when groups such as media outlets, politicians, even some NGOs, speak about survivors of human trafficking, they hardly ever speak to them. Do you agree with that?
Hmm, I don't like when people say: “we rescued so-and-so.” But, it’s a tough question because I’m also a survivor, someone who has experienced trauma. And, sex trafficking or rape is such a grey area, so shame related. I don’t want to speak towards other organisations, but for us: It requires a balance, you have to know when to push somebody and gain their respect. Often, simply by showing up, allowing for mistakes and then saying the door is still open. But, you also have to respect everyone and meet them where they’re at. It’s not always peaches and cream, especially in times of Corona.

How has Corona been for you as an organisation?
Logistically, it’s been a nightmare, planning how we can be together. Because isolation can be a trigger for trauma, it’s been tough on some of the girls. Oh, and then our treasurer would want me to say that we're always looking for funding because it’s always hard. But, the people we work with are fighters. They’ve proven that because they're still alive, after many beatings, even torture, guns against their heads, multiple rapes… They're still going like it's nothing. So, Corona Shormona!


Want to get involved? Donate to Share Network or check out other ways to help the organisation.
Picture: Roella with two of her students at the Share Academy nail salon