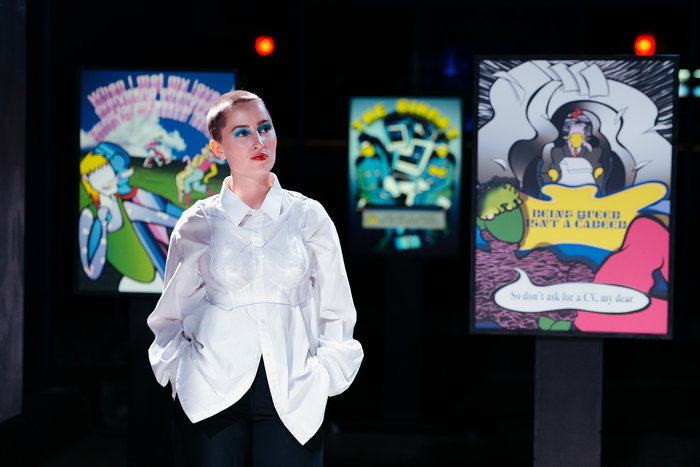 If you’ve ever been to our store, you must have noticed the magnificent nudes on its storefront. Painted curves, vulvas and boobs on display like peanut butter and oat milk would be on display at a regular storefront (because we’re not a regular store, we’re a cool store). Our mural is created by visual artist Gerdien van Halteren, better known as GARY, whose colourful and dreamlike figures challenge very real taboos around sexuality and identity. Case in point: her illustrated nipples and pubic hair were dubbed a scandal by some of our neighbours.

GARY’s new work, Breaking the Bias, is deeply rooted in her personal experience, yet surprisingly relatable and accessible. With bright billboards in her signature technicolour style, it challenges the prejudice around Bi+ sexuality whilst celebrating all that is between the binary. It’s also (partially) on display in our windows - as if you needed another reason to visit the TITS store. As the creator of such personal and sometimes intimate work, she’s equally honest when talking, sharing everything from her sex dreams to her thoughts on queer-baiting during an open-hearted, Tuesday-morning chat.

Imagine: you got millions of euros in funding to start a club. What kind of club would it be?
I think it’d be a sex club. I had this very vivid, very visual dream of a sex club and it was so much fun! I made some sketches of it. Everything was smooth and curvy, and we all had little baskets with sex toys. The doors were made of chains, there were little streams of water, it was a very fantastical, sexual, sensual fun space. We were just hanging with the gals with our baskets with sex toys, and a man was laying on the floor… and you had to step over him, but liked it! And there were snacks! That’s crucial in my club. Yeah, so that’s going to be my club, my dream club, literally. 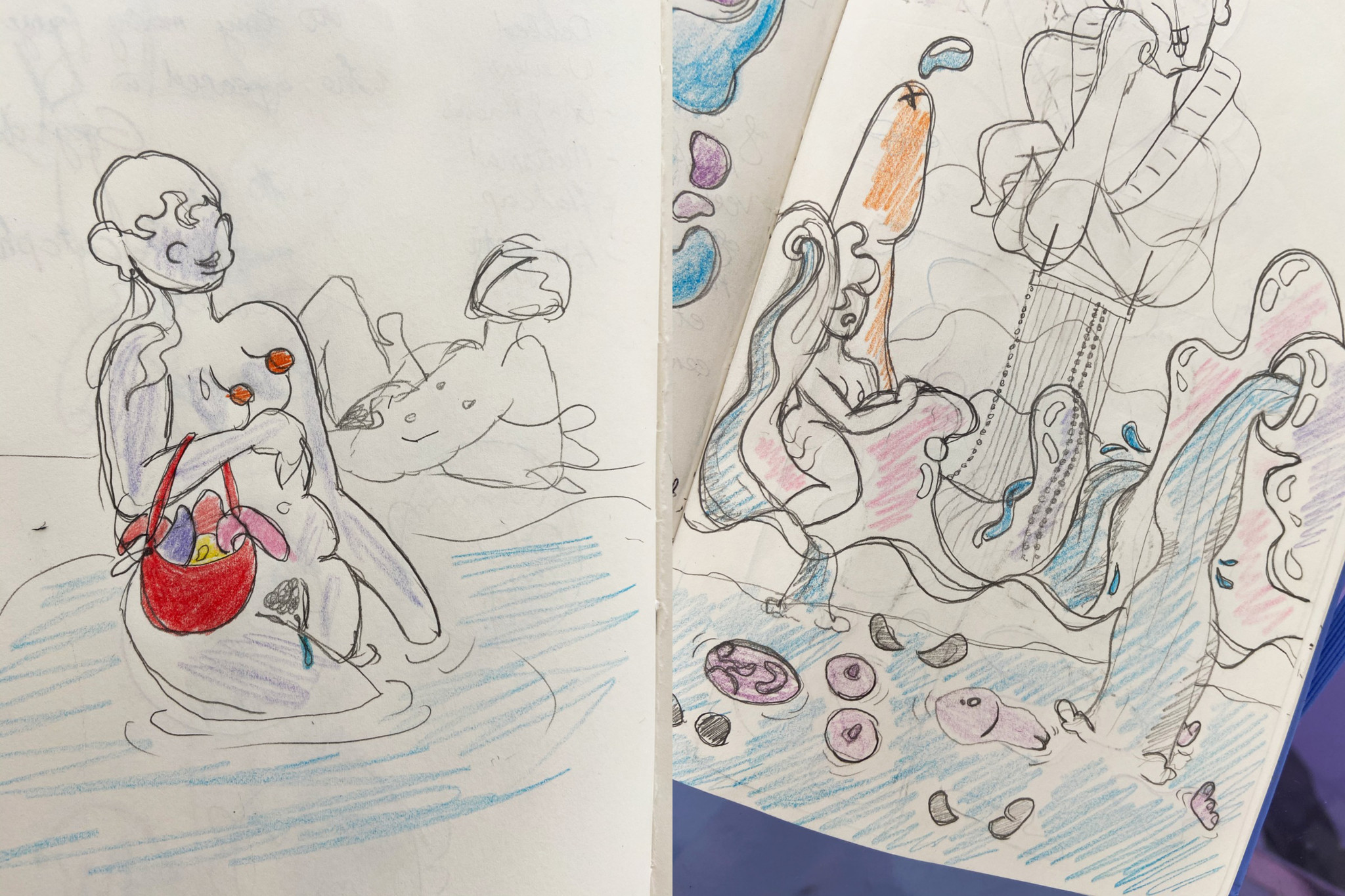 Evidently, your work comes from a very personal angle. It also often addresses identity and sexuality. What initially piqued your interest in these areas?
The things I missed when I grew up in a narrow-minded small town. Once I realised that I identified as queer, I also realised that I missed so much during my education or growing up that would have helped me to find my path faster. I struggled to accept my queerness and my gender expression. But my work is also celebratory, having finally found my path I’m now able to celebrate that part of me.

Because, how do you think that our society views sexuality?
Still fairly taboo, maybe even more than in the ’60s or ’70s when nudity was just a part of it and very natural in the gay scene. Now we have a lot of conversations about sexuality and we are trying to change it. But yeah, there's a certain discrepancy in that regard. Right now we mostly see sexuality as this deviant or indulgent act, not as natural, part of family life, or part of different kinds of relationships.

Do you think it’s also due to the internet, especially social media, that our bodies are more sexualised? Like, partially because anyone can non-consensually photograph and post your body online, and partially because there is just so much (hetero, male-orientated) porn.
Yeah exactly! I just had this conversation with my boyfriend. We were talking about walking naked through the city, during the pride walk for instance. It should be natural, not a big deal to do so. But then we immediately realised that our bodies would be published on the internet and it could jeopardise our future, even working in the creative field.

So what does sexuality mean to you?
It’s important to me: it's about connection and self-exploration. Not just with your partner, but with yourself as well, to reach a different level of self-acceptance and self-love. The connection with somebody else is super beautiful, how that unfolds when having sex or sexual encounters. But regardless if it’s sex with yourself or with someone else, it always comes back to your relationship with yourself. That’s also why sexuality is such a precarious thing, so vulnerable. Because it can be broken by outside influences so easily. 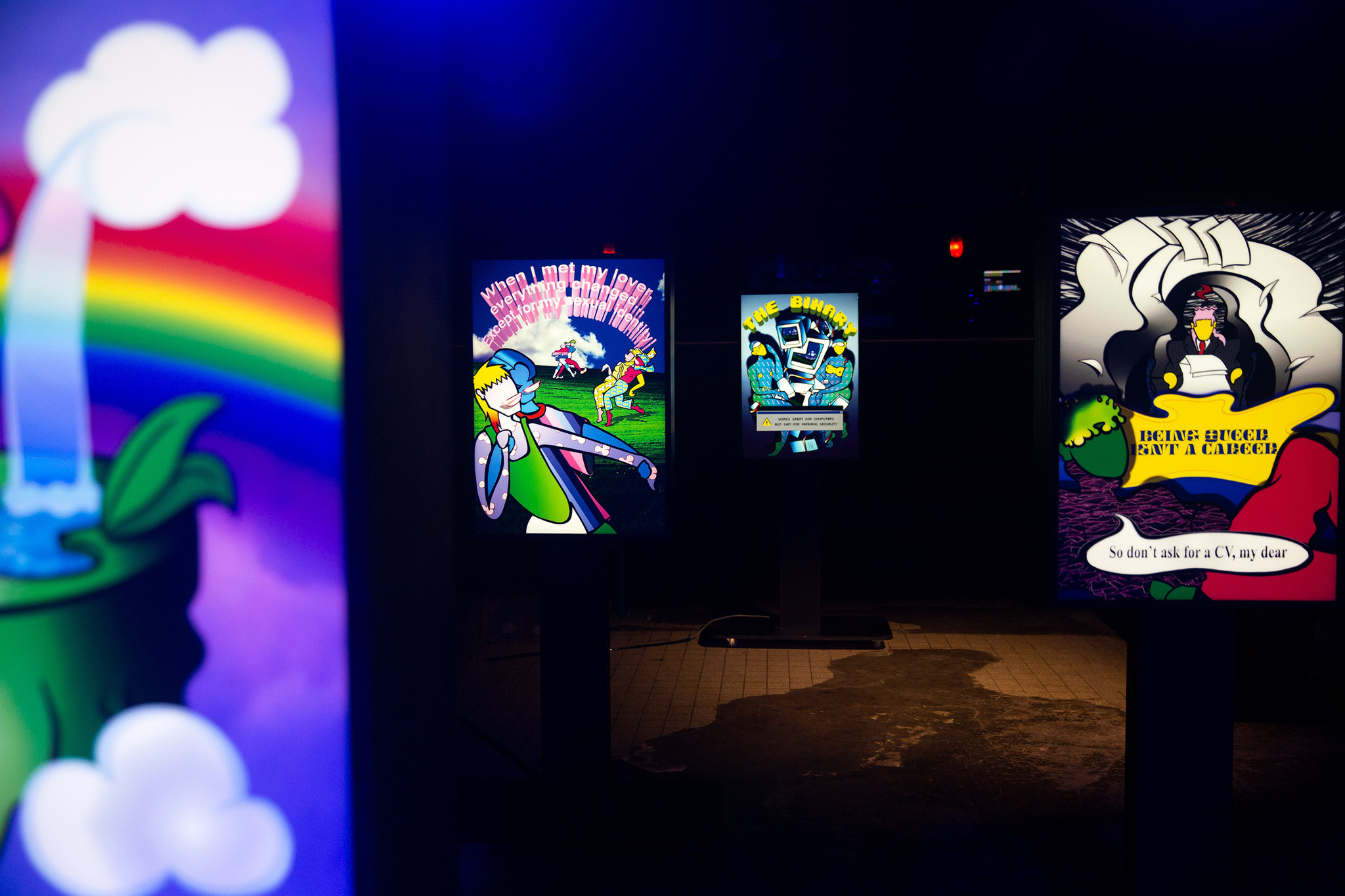 When did you first identify as Bi+?
I think that was quite late: when I was 21 or 22. In hindsight, I fell in love with a lot of girls, I even slept with girls, but there was that voice in my mind saying: “it’s just a phase, you’re only doing it for attention, bla bla bla.” That that voice is so prominent. And when I did some research, I found out it’s prominent in a lot of people.

Is that also why you created Breaking the Bias?
Yeah, I missed the representation of sexuality in-between the binary. I’ll call it Bi+ for now, but of course, that’s also another box or label. The more I talked to other people who identified similarly, I realised we’re dealing with the same issues from straight and queer people. The bias is all over. And there's so little representation, still. Even though the B from Bi+ is the third letter in LGBTQ+.

It’s pride month, in Amsterdam, which will probably leave some people to ask: “what bias? We live in a tolerant place.” What would you say to those people?
Yeah… No. It's not tolerant at all. Like, there was a survey of most tolerant places, and we came in 13th. We're not there yet. I have so many acquaintances that do drag or dress gender-nonconforming. They get harassed day-to-day, they get rejected from cabs, from people in the dating scene… People are, even within the scene, very biased and very discriminating against Bi+ sexuality, so I think we have a fairly long way to go.

I think a lot of people can imagine the prejudice towards Bi+ people coming from straight corners, but it also comes from queer corners. Why do you think that is?
From straight corners, you kind of expect it, particularly from people that aren’t familiar with the scene or lack information. But we grew up in such a black-and-white society, where you’re either female or male, gay or straight, and that gets so internalised. Even if you’re “out of the closet,” you can still hold on to so much internalised hate. I also think Bi+ gets a bad rep because it’s seen as having one foot in the queer world and one foot in the straight world. I disagree actually, and there's not like a straight scene, that's just society. So to many, the queer scene feels like a safe haven away from those who never understood you. And suddenly there are people who you feel are just dabbling in-between. I can kind of understand that… 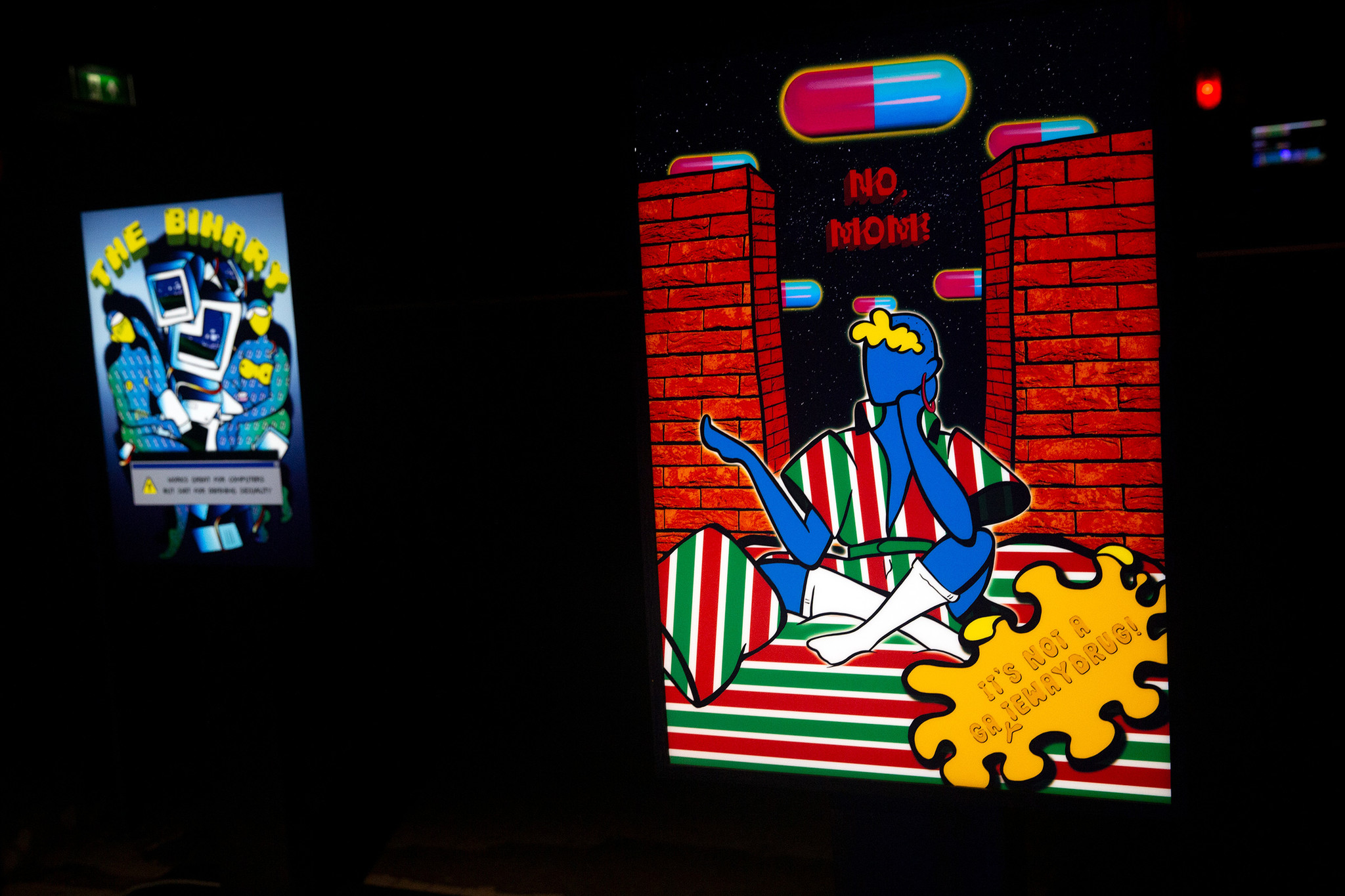 Do you think that this prejudice from queer spaces is also amplified because of all the pinkwashing, and queerness being positioned almost as ‘trendy’?
Yeah, there’s this fear that you’re just here to… like just kiss three girls and you have your all-access pass to the queer spaces. I feel that tendency from some people, but I don’t want to believe in it too much.

I don’t mean so much that people are “becoming” queer to join the hype, but that the fear exists from queer spaces because it’s framed as on-trend by companies?
Yeah. You see it also with the queer-baiting in ads, video clips, TV… it’s a very trendy and woke thing to lean into the queerness, so I can see that being perceived as a threat. But I hope people give each other some slack. As queer people, we hate being labelled only to then label each other. So I think there’s still a lot of unlearning to do, also for me. We still have to learn to just accept people for who they are, who they love and how they express themselves.

What advice would you give to people who feel like they’ve fit in a certain binary or box their whole life, but now wonder if their attraction goes beyond that?
Just do it! You don't have to fill out a resume or sleep with a bunch of people to prove yourself. Maybe research, talk to people in the queer community, or people who identify with a different label than you. Just trust your gut, if you feel a certain way you don’t have to prove it to anyone, not even yourself. Also embrace shifts in sexuality, in identity, even in gender. It’s all a spectrum on which we can all float around.

So obviously, Breaking the Bias is a must-see for people who (may) identify as Bi+, but why should everyone else see it?
For people who may identify as Bi+, it’s nice to see some of the prejudice or bias you may come across in your dating life, to feel represented. For anyone else, it might be nice to challenge your view of sexuality, get an idea of the full scope of what sexuality might be. I hope Breaking the Bias is a fun yet urgent way to teach more about sexuality beyond the binary. I didn’t want to point any fingers, I wanted to educate and also celebrate. So it’s also very accessible, a conversation piece. I learned a lot during the research and the making of this project. We’re learning together. 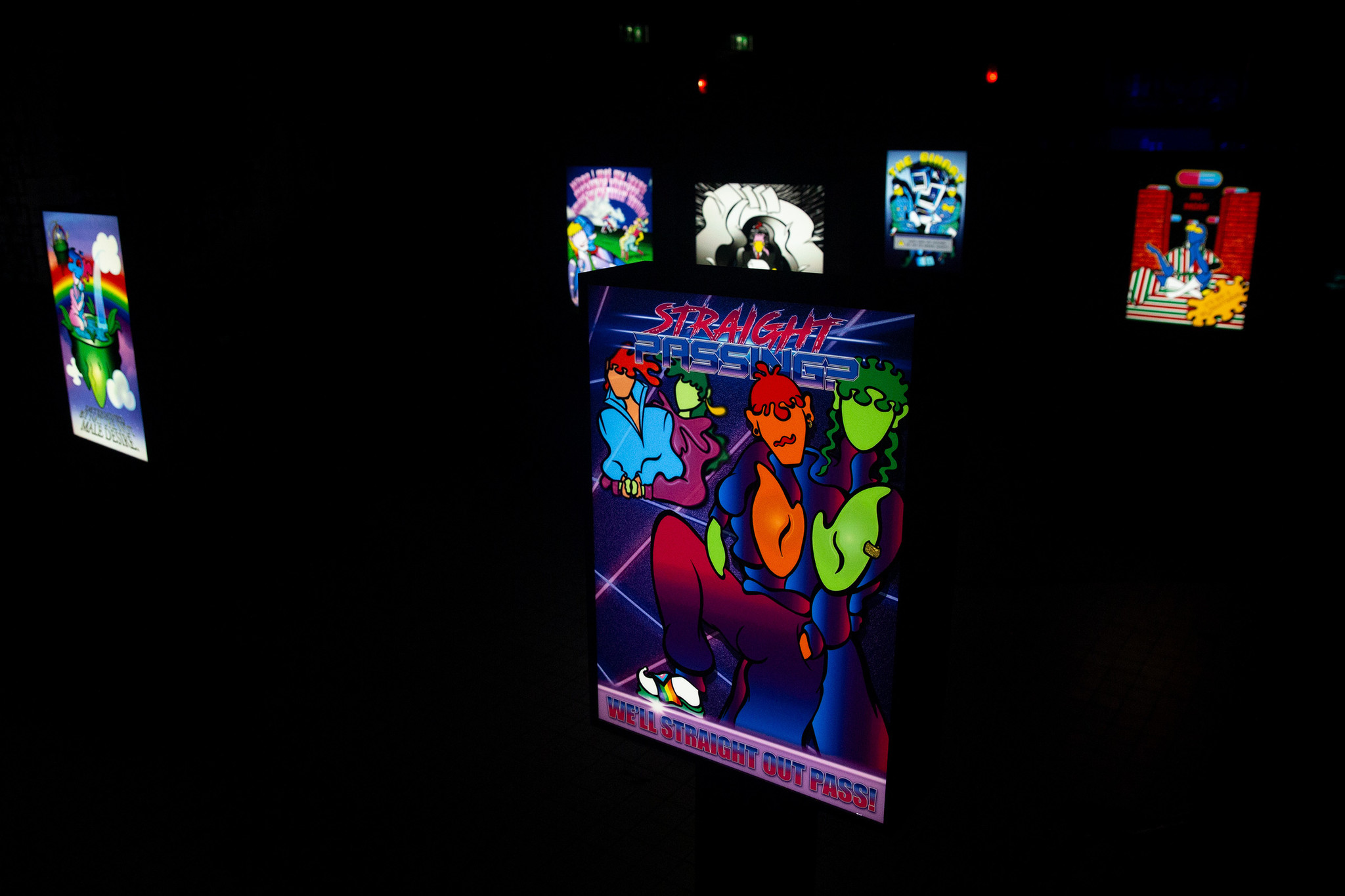 Breaking the Bias can be admired at our store, or check out GARY's website to learn more about the project. Expo images are made by Lotte Dale.