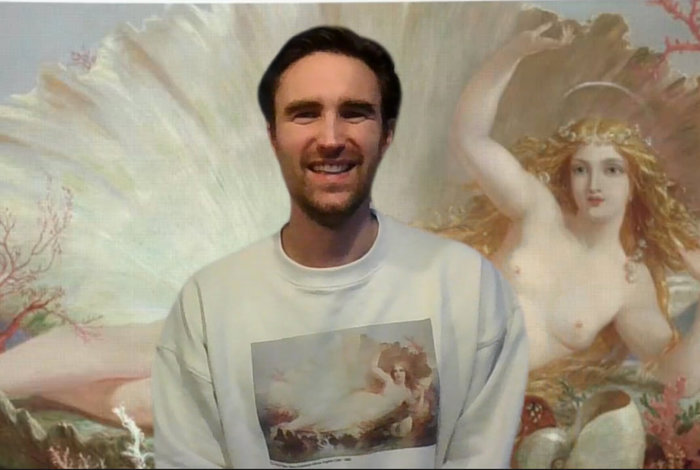 As part of our 6th birthday celebration, we wanted to introduce you to our team. Think of this as the digitally published version of laid-back party chit-chat, except during office hours and with less booze. This time, we pass the mic to Robert, our financial partner and investor. With his thoughtful, pragmatic attitude and commercial knowledge, Robert offers the perfect counterbalance to our enthusiastic spontaneity. Despite describing himself as an introvert, he candidly shares his thoughts on creativity, commerciality and girlbosses, alongside some entrepreneurial tips on attracting investors.

With the exception of your image above, you're often dressed in jeans and a T-shirt. I’d say that, upon first glance, your style doesn’t often scream “TITS”. How did you get involved with the brand?
I've been friends with Nathalie and Mathilde for quite a while and always thought they had a really cool brand with a strong idea and message behind it. So, I kept on encouraging them to expand it, and after a long time of nagging on my side, they finally agreed. I like TITS’ idea of equality, sexual freedom having the right to be who you are. Maybe I don’t express myself as such through my clothes, but I identify with the underlying idea.

Is that also why you decided to invest in TITS?
Yes… well, it sounds very ideological like that. I also think TITS is a great brand that can have a lot of financial success. So it goes both ways, It’s a great concept that makes financial sense.

Nathalie and Mathilde asked me this, so I’m going to ask you as well. What’s it like working with two girlbosses?
Haha! On the one hand, I don’t think there’s a difference between working with men or women. On the other, emotions are more frequently discussed by women in the workplace, which maybe is a good thing. It’s not like men at the office don’t have emotions, they just don’t talk about them, which might result in erratic or otherwise unpleasant behaviour. So I don’t think it’s a bad thing that emotions are a part of business and they’re talked about.

Whereas we (Mathilde, Nathalie and I) tend to focus on the creative side of TITS, I feel like you often remind us of the commercial side. You ground us a bit, which we sometimes need. So where, for you, lies the balance between creativity and commerciality?
Good question, I think that the financial side makes the creative side possible, and the creative side is limited by the financial possibilities. But at the same time, the presence and existence of TITS is very much rooted in its creativity. If you’d cut that, you’d have nothing left, so it’s important to leave room for that. But, of course, there always has to be someone checking if we can pay for everything, and that someone is me.

What advice would you give to young entrepreneurs who are trying to get funding?
Gets rich friends! Haha, no I’m joking. I’d say, make a good plan and be as enthusiastic as you can be, even when things aren’t going great. That energy will attract people who want to invest in your idea or product.

What is your craziest or funniest memory involving TITS?
That’s a tough one, we just had a year of mostly disappointments, which isn’t conducive to crazy or funny moments. But something I think about is right after Corona happened we had to shut down everything yet still pay every bill. Even though that was a very painful process, we could occasionally still laugh about the situation.

And what do you see in the future for TITS?
World domination! Haha! From the financial side, I do like that we’re expanding our product and becoming available in multiple countries. But, I really like that we can play a part in changing how we, as a society, interact with each other, like between different genders or sexual orientations. I like that we can be a small part of the solution, that we can encourage everyone to be accepted for the way he, she, or they wants to be.